A couple months ago I woke to a male voice saying “The Island of the Sun will change your life”. I have had experiences like these before in my life when I hear or see things, but it had been a while since I had heard something so clearly as I was waking up. It was pretty dramatic.

I went downstairs and started Googling Island of the Sun. The first piece of information I stumbled upon said “the activation occurs on the boat ride over”. What? Activation? I had started hearing ACTIVATE THAT WHICH IS DORMANT in 2006, and have been on a journey to do that ever since. I have also heard “you are encoded”. When I started to read up on Lake Titicaca I came across a lot of information about Light Code Activation.
According to Drunvalo Melchizedeks book, Serpent of Light Beyond 2012 The movement of the Earths Kundalini and the Rise of the Female Light, Lake Titicaca holds the feminine energy of the planet. 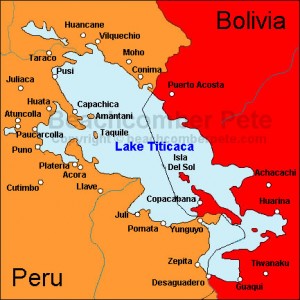 “The stunningly beautiful site of this holy lake is simply breathtaking, literally, lying some two and one half miles above sea level, its elevation alone is capable of creating altered states. At 12,300 feet above sea level, Titicaca is the highest navigable lake on the planet, and the second largest lake in South America. Some say it is one of the most sacred places on the planet. I have been there eight times, and wholeheartedly agree. The most powerful energy of Lake Titicaca is a transformational axial point on Island of the Sun. It is called ‘El Rocque’. Local mystics refer to it as the 12th Gate, believing that the twelfth Sun Disc is near the Island, and holds the frequencial key to a sacred and powerful Wisdom Initiation.
Many state that Titicaca carries a feminine energy. Indeed it does, but it also carries the masculine. It is an exemplary marriage of both. In fact it is Titicaca’s perfectly heterogeneous balance of male and female that attracts so many to the healing terr aqueous energy colloid. The holy lake does receive and blend enormous inflows of the female energy so necessary for our planet to achieve balance, but it is the female/male balance that Gaia ultimately seeks to project, not a predominantly male or female field. However, the ongoing influx of female energy is required to achieve planetary neutrality with the male energy that has predominated since the sinking of Mu.” – James Tyberonn
“The Golden Solar Discs hold the light codes of the living library of light at the level of the Greater Central Sun. The living library of light is the creation story that we are experiencing. As we make the shift into the next root race and being our light in a body, multi-dimensional selves all merged as we become the Creator Goddess God. We are creating Heaven on Earth in our body, our body of Light. Since the Solar Eclipse August 1st 2008, higher frequencies of light have able to ground through those who are clear vessels, previously the Golden Solar Discs vibrated at the Central Sun creation codes. As we unify and thereby vibrate at higher octaves of light so too do the discs as it is now possible for the higher light codes to come through us. Awareness of being in the Council of Light, remembering who you are and aware of other worlds and dimensions, all one with the physical earth world, no separation, only oneness is experienced as one goes deeper within to the stillness.” – Soluntra King.

IN PERSON:
Be sure to make an appointment to meet with Barbara Reynolds for your personal Activation Session. In person Activations are currently being offered in


PHONE:
Barbara has openings for Readings and Activations over the phone. Click HERE to make an appointment.

"Thank you Barbara for another amazing Activation. It's truly a magical experience the way you dig through the sludge we call reality and pull forward our own individual unique light within ourselves. Allowing us to witness what we are divinely made of and know our own awesomeness."
Amy C. Delaware

"My experience with Barbara today was absolutely priceless an I will be forever greatful. Thank you sooooo much!!"
Dawn C. Delaware

"Barbara Reynolds is an amazing woman with a beautiful soul. I am so grateful for the time she gave to me today. Thank you so much. I look forward to her next visit."
Michelle J. Delaware